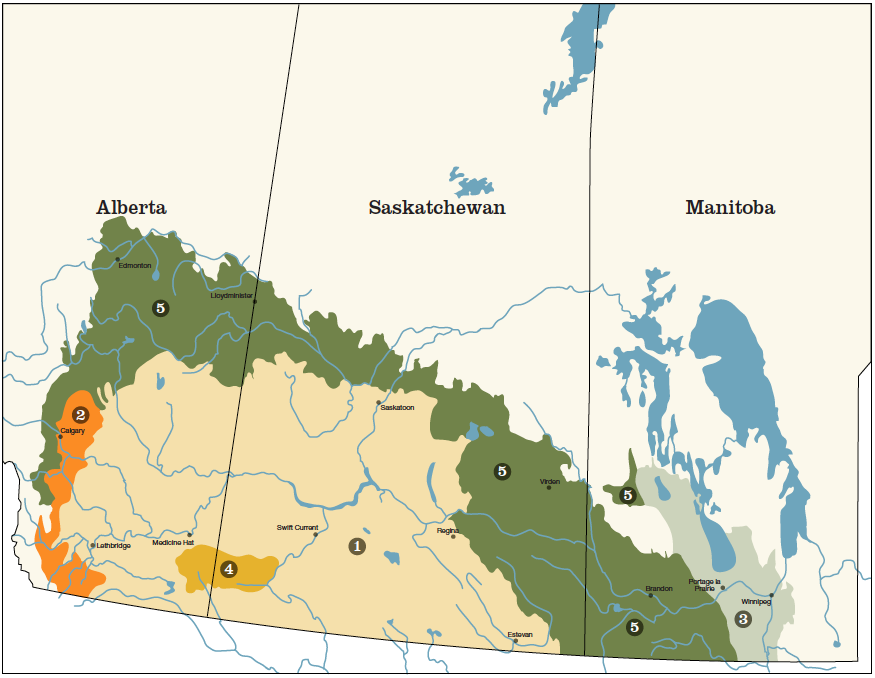 It was early French explorers who coined the word “prairie,” to refer to the rolling hills and flat plains of grasses they encountered in the Canadian west. Three distinct types of prairie were later described and classified by ecologists: Tall Grass Prairie, Fescue Prairie and Mixed Grass Prairie. Aspen Parkland is a transitional ecosystem which occurs where the grasses gradually decline and the trees gradually increase. Parkland thus consists of Aspen or Bur Oak bluffs in low, moist areas, intermixed with prairie in the drier areas.

Tall Grass Prairie takes its name from the dominant grasses, namely bluestem (Andropogon) and Indian grasses (Sorgastrum) that grow well over 1 metre tall. This prairie once stretched across what is now the “corn belt” of the United States of America and into southern Canada. The main range of Tall Grass Prairie in Canada is a 6,000 km2 area along the Red River Valley in Manitoba, and a 1,200 km2 area of sandy soil in southern Ontario, between Lakes Huron, St. Claire and Erie. 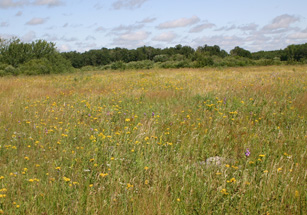 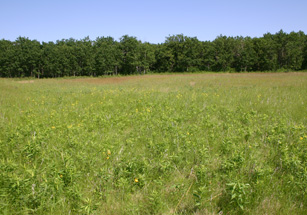 Unfortunately, this grassland is extremely rare in Canada; all but a fraction of one per cent has been converted to cropland, urban development, industrial sites, or has been invaded by forest cover. Some of these lands have received protection under Manitoba’s Critical Wildlife Habitat Program (http://www.gov.mb.ca/conservation/wildlife/habcons/cwhp/index.html).

Fescue Prairie is found in a belt between the Mixed Grass Prairie and the Boreal Forest, and in the Cypress Hills of Saskatchewan. Fescue Prairie is dominated by fescue grasses (Festuca). Ecologists have not been able to satisfactorily reconstruct the former extent of the Fescue Prairie. However, remnants found all along the northern fringe of the prairies suggest that this was the dominant grassland of the black soil zone. 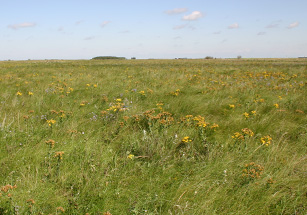 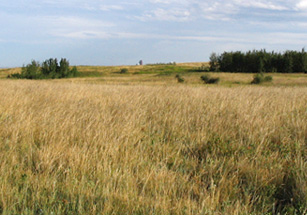 Fescue Prairie occupies a moister environment than Mixed Grass Prairie. It can be found on isolated hill complexes of the Milk River Ridge, Cypress Hills, Touchwood Hills and the Manitoba Escarpment. Fescue Prairie is the prominent grassland in the Aspen Parkland, except in southeast Saskatchewan and southwestern Manitoba where Mixed Grass Prairie shares the ground with Aspen groves. Once extending over 255,000 km2 in the Prairie Provinces, less than five per cent of the original Fescue Prairie remains.

Mixed Grass Prairie occurs in southern Saskatchewan, Alberta and Manitoba. It is sometimes erroneously referred to as Short Grass Prairie, which in fact is only found in the southern United States. The most common grasses in the Mixed Grass Prairie are wheatgrasses (Pascopyrum), speargrasses (Hesperostipa), blue grama (Bouteloua gracilis) and June grass (Koeleria macrantha). 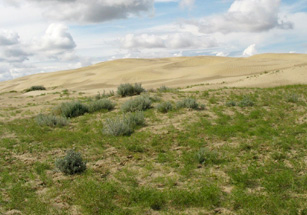 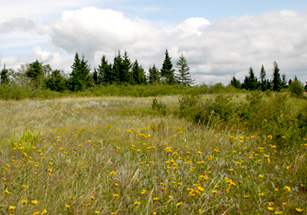 The Mixed Grass Prairie occupies the dry interior plains from Canada south to Texas. Thousands of years ago, tall grasses from the southeast, short-grasses from the southwest, and mid-grasses and sedges from the north intermingled, hence the name Mixed Grass Prairie. The grasses typically occur in two layers, medium and short, with the shorter grasses and sedges taking over in dry areas, during extended droughts or where overgrazing occurs.

Over half of the remaining native grassland in Canada is Mixed Grass Prairie. Originally, there were over 24 million hectares of this type in Canada; however, less than a quarter of this area remains. Given the broad distribution of Mixed Grass Prairie, there is considerable variation in the mix of dominant plants. This is particularly true in the Parklands, but also where Mixed Grass Prairie merges with Tall Grass Prairie in the southeast and with Fescue Prairie to the west. The Mixed Grass prairies on sand dune areas contain a number of unique species

About the Prairies - Prairie Types