A wide range of animals have been observed pollinating flowers. Bats, lemurs, geckos, parrots and possums are among the more unusual pollinators found in tropical ecosystems. In Canada, however, the main pollinating animals are hummingbirds and insects.

The most fascinating thing about hummingbirds is the speed at which they beat their wings: 12-80 times per second! This enables them to hover, change direction quickly and even fly backwards. Hummingbirds need to eat 1.5 to 3 times their body weight in nectar and insects every day to maintain this rapid flight. At night, hummingbirds enter a very deep sleep called torpor in which their body temperature drops considerably and their heart beat decreases from about 500 beats per minute to about 50.

Hummingbirds have a poor sense of smell but can see reddish colours very well. For this reason, flowers that are commonly visited by hummingbirds tend to be red, pink or orange. Hummingbird-pollinated flowers may also lack a fragrance, unless they are also visited by insects, which have a better sense of smell. Native plants that will attract hummingbirds include Showy Milkweed, Swamp Milkweed, Western Red Lily, Wild Columbine and Wild Bergamot. You can also attract hummingbirds by putting up special feeders, nesting platforms, bird baths or misters, and planting horticultural species attractive to hummingbirds, like Scarlet Runner Beans (Phaseolus coccineus), Cardinal Flower (Lobelia cardinalis) and Scarlet Sage (Salvia splendens). 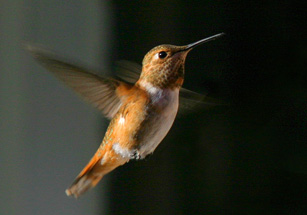 Hummingbirds have five main body parts: (1) head, (2) body, (3) wings, (4) legs, and (5) tail. Features of the head that are often uniquely coloured include the crown (e.g. top of the head), cheeks and throat. Bodily features with unique colouring include the back, breast and belly. The underside of a bird’s wing is often a different colour than the topside. 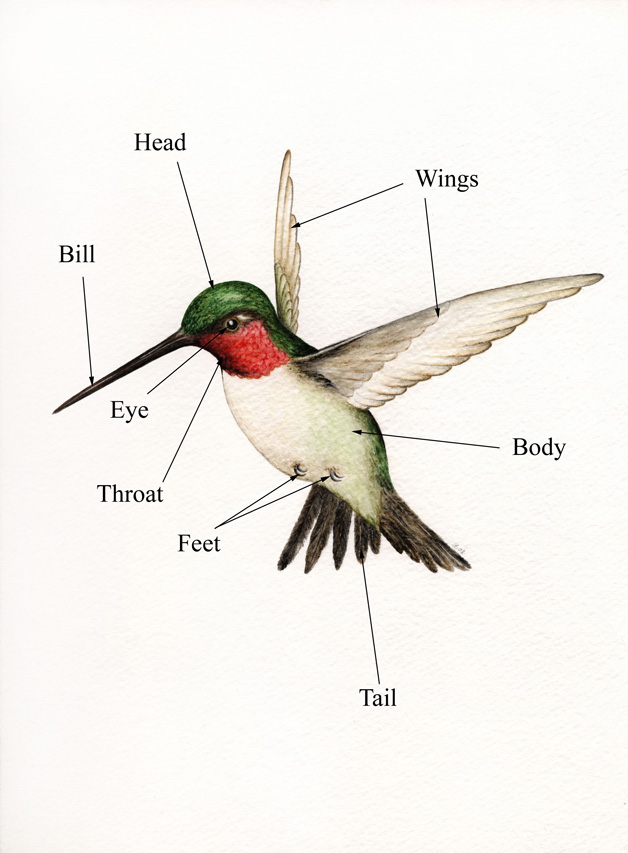 To learn more about the hummingbirds of the prairies, go to the Pollinator Gallery.

Unlike humans, insects have an external skeleton, or exoskeleton. In order to grow, insects must shed their old skeletons and create new ones. This process is called moulting. You might find the shed skins of insects attached to tree bark or leaves. Insects differ from other creatures with exoskeletons due to their number of legs: six. Spiders and other arachnids have eight legs. Millipedes and centipedes have many legs. 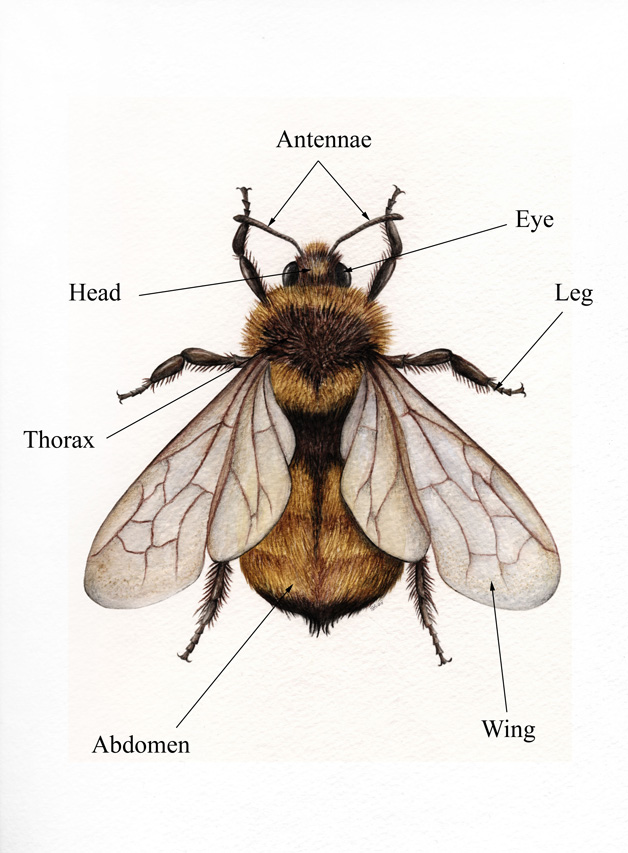 Insects are also unique because their bodies are divided into three distinct parts: a head, chest (or thorax) and belly (or abdomen). The head of the insect has two sensory organs, called antennae. The shape and size of antennae are often important in identifying different species. Insect mouthparts are quite complex, but the most important organ of pollinating insects is the proboscis, which is used to obtain flower nectar. The eyes of insects are compound, meaning that they consist of many small eyes clustered together. Insect vision is different from ours; they cannot see reddish colours very well, but they can see all the way into the ultraviolet range. 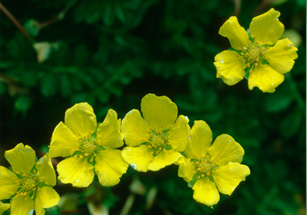 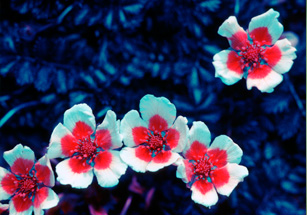 The insect groups that are the most common pollinators are bees and wasps (Hymenoptera), flies (Diptera), butterflies and moths (Lepidoptera) and beetles (Coleoptera). Bees are the only species of insect that have been domesticated by humans. The honeybees (Apis) are native to Asia but were brought to Canada to supply humans with honey, beeswax, pollen and royal jelly, and to help pollinate some crop plants. Nowadays, other bee species, including bumblebees (Bombus), orchard mason bees (Osmia), and leafcutter bees (Megachile), are being raised to pollinate greenhouse crops like tomatoes, orchard plants like almonds, and field crops like alfalfa. 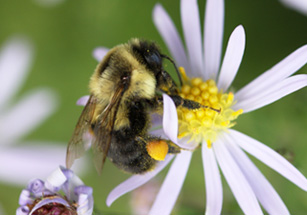 Bees and wasps can’t see reddish colours very well but they can see ultraviolet light. Thus flowers visited by bees and wasps are typically yellow, purple, pink or blue with ultraviolet nectar guides to point the way to the food source. Bees and wasps have an excellent sense of smell so the flowers they visit are often perfumed. Some bees and wasps have long tongues and will visit tube-shaped flowers while others have short tongues and visits shallower species. As most bees and wasps provide their babies with food, they must visit large numbers of flowers every day to obtain enough. Bees are truly busy; they sometimes visit a thousand flowers per day. 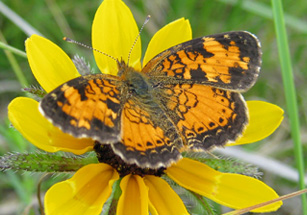 Butterflies and moths are the most beautiful pollinators with patterned, often brightly coloured wings.  Many butterflies depend on plants not just for nectar, but also as food for their larvae.  Milkweed butterflies, including the monarch, lay eggs on the same plants that they visit for nectar as adults.  Since butterflies are active in the daytime they will visit brightly coloured flowers.  In contrast, moths, which are mostly active at night, tend to favour white flowers as they can be seen more easily in dim moonlight.  Butterflies and moths have long tongues, which helps them drink nectar from flowers with deep tubes or spurs.  The endangered Western Prairie Fringed Orchid can only be successfully pollinated by long-tongued Sphinx moths.  The only legally protected insects in Canada are butterflies and moths. 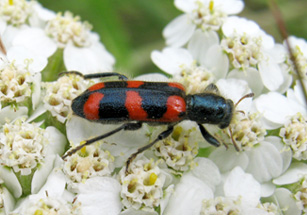 Beetles are unlike other insects because they have one hard pair of wings called an elytra and one pair of membrane-like wings. Beetles are the most diverse insects on earth: one in every five species of animal is a beetle! Only a few groups of beetles are actually effective pollinators. Plants visited by beetles tend to have shallow flowers, pale colours and a strong scent. Beetles prefer eating pollen to drinking nectar. 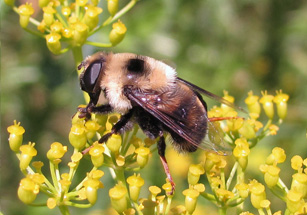 Flies are probably the most underappreciated pollinators.  Despite the fact that they are the next most abundant group of pollinators (after bees), few people even realize that some of the pollinators they observe are actually flies.  This is because many pollinating flies closely resemble bees, with black and yellow bodies and sometimes dense hair-like bristles.  Look closely though and you will see that flies only have one set of wings while bees have one large set and one smaller set.  Flies have shorter tongues than other pollinators and tend to favour plants with small, shallow flowers, like asters. Some fly-pollinated plants smell pungent or like rotting meat!

To learn more about the insect pollinators of the prairies, go to the Pollinator Gallery.

About the Prairies - Prairie Pollinators