Since plants are rooted in the ground, they are unable to travel when they need to find a mate. Or can they? By packaging their DNA into tiny pollen grains and producing structures that attract animals, plants can use animals as reproductive couriers. The development of elaborate flowers and the assistance of pollinators allowed the flowering plants to evolve into the millions of species we have today.

Plants consist of four main parts: (1) roots, (2) stems, (3) leaves, and (4) flowers. Differences in the shapes, sizes and textures of the leaves and stems can be used to identify different species. Flower shape, size, abundance and position are also extremely useful in species identification. 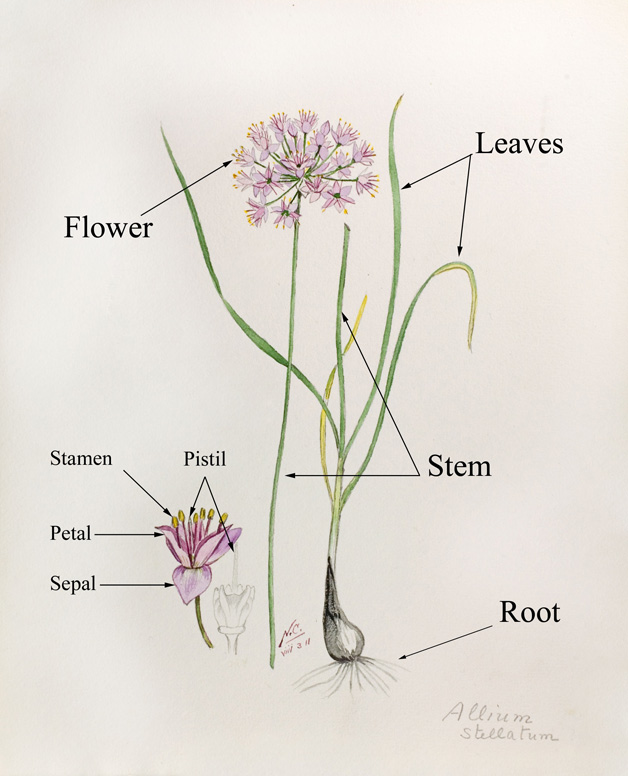 Flowers can occur singly or in arrangements, like clusters and spikes. Plants in the Aster family consist of many tiny flowers, clustered tightly together in a structure called a head.

Flowers that are animal pollinated consist of four parts: (1) sepals, (2) petals, (3) stamens, and (4) pistils. Each of these parts is attached to a common base called a receptacle. The sepals are the outermost parts of the flower. Generally, they are green, but they can also be brightly coloured. Petals are to the inside of the sepals and are generally white or of various colours. Sepals and petals may look virtually identical. The main function of the sepals and petals is to attract pollinating animals.

Stamens occur to the inside of the petals. Stamens consist of two main parts: a stalk, called a filament, and pollen-producing sacs, called anthers. The anthers are where sperm-containing pollen is produced.

Pistils occupy the innermost portion of a flower. A pistil has three main parts: (1) an ovary, (2) a style, and (3) a stigma. The ovary occurs at the very bottom of a pistil and contains ovules, which, when fertilized, develop into seeds. The ovary itself becomes the fruit. The style elevates the stigma so that pollen is more easily captured. The stigma is the pollen receptor at the tip of the style. Some flowers have only one pistil, but others have many pistils attached to the receptacle (e.g., raspberry).

To learn more about the animal-pollinated plants of the prairies, go to the Plant Gallery.

About the Prairies - Prairie Plants